Is The Highway Safe For Motorcycles? 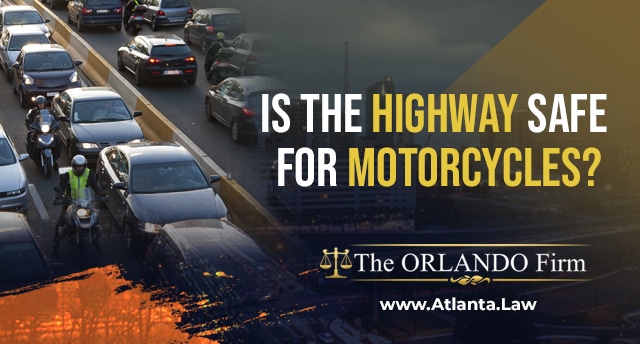 When you are driving your car down a multi-lane road, and traffic slows, you might be surprised to find that a motorcycle has darted between you and the car next to you. What the motorcycle driver has done is called lane splitting, white lining or stripe-riding, depending on where you live.

We’ll just call it lane splitting. Frankly, it looks exhilarating. But there also seems to be a potential for some nasty accidents. Is it safe, or not? People, and states, differ on whether motorcyclists should be permitted to drive this way.

There are several dangers to lane splitting. Part of the reason is that cars and motorcycles are such different vehicles. Cars are more stable, have a greater turning radius and are generally more “clunky” than motorcycles. Motorcycles, on the other hand, can and do zip around. They are nimble and maneuverable when ridden by an experienced motorcyclist.

More specifically, the most common type of lane splitting accident occurs when the occupant of a car unexpectedly opens the car door. If a motorcyclist is flying by at that moment, a crash will occur that is dangerous to both motorcyclists and drivers. Another common problem is that sometimes a car will unexpectedly turn, either right or left, and the motorcyclist slams into (and over) it. When the vehicle is an eighteen-wheeler, the motorcyclist might be injured while sliding underneath it.

California is the only state that explicitly allows lane splitting. In a 2015 study, the University of California at Berkeley’s Safe Transportation and Education Center found that lane-splitting is relatively safe when traffic is moving at fifty miles per hour or less and when motorcycles are not exceeding the speed of the cars around them by more than fifteen miles per hour. It turns out that the difference in speed between the cars and the motorcycle is the better predictor of the likelihood of injury.

Another safety aspect is that it’s unlikely for a motorcycle to get into a rear-end collision when lane splitting because the motorcyclist is between cars, not in line with them.

Georgia does not allow lane splitting, but we see it all the time. If you are the victim of an accident caused by lane-splitting, you should contact an Atlanta motorcycle accident attorney as soon as you have received medical attention.