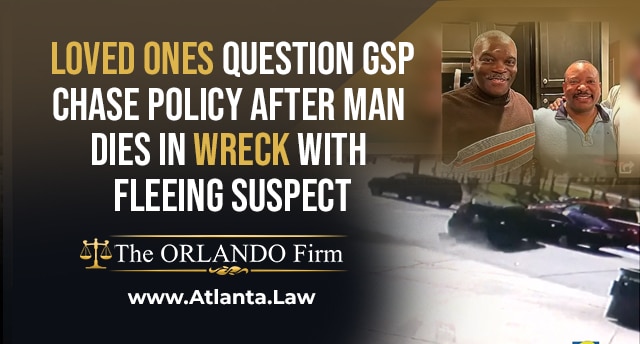 DEKALB COUNTY, Ga. — A man who a Georgia State Patrol trooper tried to stop raced away and crashed into a car and killed a man simply waiting at an intersection Sunday.
Larry Turner said he still can’t believe his best friend of 30 years, William Johnson, 60, is gone.
“I lost my brother,” Turned said. “This is very senseless.”
Johnson was killed Sunday just before noon as he waited for a red light at McAfee and Candler roads.

That’s when a speeding SUV came out of nowhere and crashed into him.Turner said he was floored when he learned a trooper was chasing the driver of the SUV for a seat belt violation. “It’s just not worth losing a life. it’s just not worth it. Over a seatbelt,” Turner said. Troopers arrested Eugene Goodson. He faces felony murder and other charges. Turner thinks GSP bears some responsibility as well. “I think they need to be held responsible, accountable. Some kind of way,” Turner said.

GSP told Jones it couldn’t say much because the incident is still under investigation, but they pointed him to their chase policy that said troopers are expected to make reasonable efforts to apprehend violators who flee.

The policy also said officers must exercise prudent and sound judgment when engaging in pursuits.

GSP said it doesn’t foresee any changes to the policy after this deadly chase. Turner said more people could have been killed or seriously hurt.

“Church letting out. It’s just not worth it if you’re not chasing by foot,” Turner said. GSP said it will review the pursuit. The trooper is currently back at work.

Johnson’s family is now planning a funeral. Johnson was killed on the same date as his father’s death two years ago.

This incident comes as Gov. Kemp is stepping in to stop the surge in violent crime in the city of Atlanta. He’s put together a team of state and local law enforcement agencies targeting bad behavior.

GSP told that it has teamed up with Atlanta police, the Fulton County Sheriff’s Office, the Department of Natural Resources and the Georgia Bureau of Investigation to combat the surge in crime throughout the city.

“Our main mission is to have a presence that we hope will reduce crime and also have an effect on the street racing,” GSP Capt. Ritchie Howard said.

“Through the investigation of the traffic stops, further criminal activity is sometimes uncovered,” Howard said.

Winne got exclusive access as troopers rolled out across the city this week as part of the new crackdown.