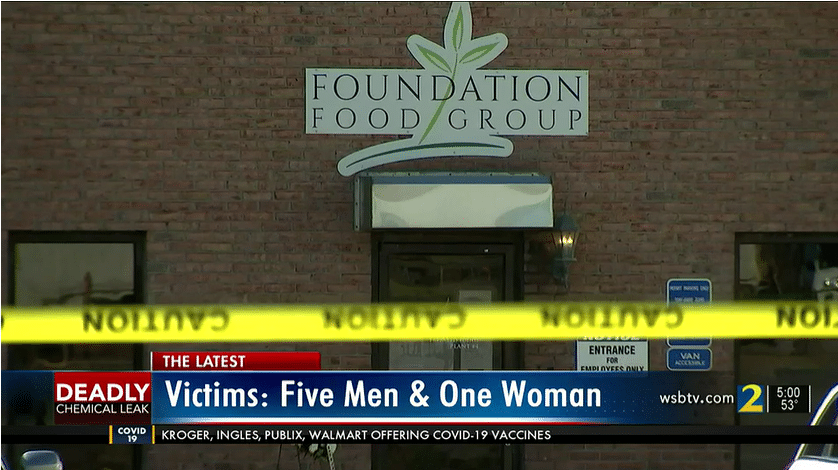 HALL COUNTY, Ga. — A Hall County poultry plant where six workers died after a gas leak could reopen within days.

Channel 2′s Tony Thomas has learned that inspectors will be back at the Gainesville Foundation Food processing plant later this week.

As federal investigators try to confirm what caused the Jan. 28 liquid nitrogen leak inside the plant, local fire marshals say they’ve found additional safety violations workers may have had to battle as they escaped the deadly fog.

“Our heart is broken because we lost these families,” said worker Jose Lopez.

Through an open records request, Thomas received safety inspection reports from the plant over the last four years, including an annual report just four days after the tragedy.

Hall County fire marshals noted exit after exit blocked by equipment and materials. Multiple emergency lights and some exit signs were not lit.

Investigators made no connection between the violations and issues the day of the leak.

Six people died and 12 were sent to the hospital during the leak. Federal investigators are looking for the cause.

“There’s got to be a little more… people need to address those concerns,” said Art Gallegos.

Community activists like Gallegos continue to work with the impacted families as the plant prepares to restart production as early as next week.

“They are heartbroken, they are mourning. This is something that shouldn’t have happened when you go to your place of employment,” Gallegos said.

“The Fire Department and Fire Marshal as well as other regulatory agencies regularly inspect our facilities. It’s not unusual for items to be noted for correction. The Foundation Food Group Prepared Foods Facility has never previously been shut down or restricted as a result of any item. We always immediately correct anything found by a regulatory agency that is not fully in compliance. The Fire Department is expected later this week to re-inspect and confirm all items have been corrected that were noted during last week’s full annual fire inspection. The building remains open, but will not resume production until that inspection occurs.

“Foundation Food Group has been and remains fully committed to ensuring a safe workplace and fully cooperating with regulatory agencies. We are committed to taking all measures necessary to ensure the safety of our employees. FFG corrects any issues we identify as well as those identified by any regulatory agencies and will continue to vigilantly do so.”

If you have been in a work or car accident, we are here help you!

Visit our website www.Atlanta.law & be sure to follow us on our social media accounts to stay updated with our latest information!