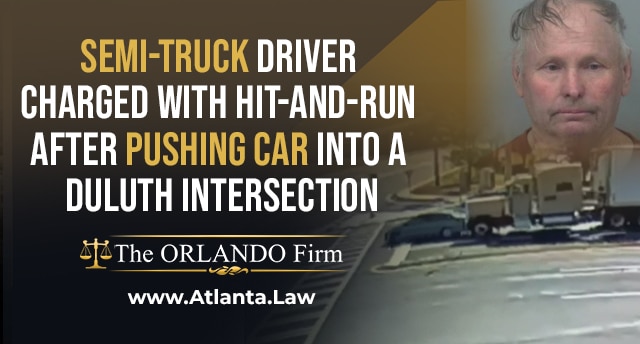 DULUTH, Ga. — The driver of a semi-truck is being charged after police say he pushed another car along a lane and into a Duluth intersection before driving away.

According to a report from the Duluth Police Department, officers were called to a gas station on Peachtree Industrial Boulevard Tuesday morning.

The driver of the car that was hit told police that while he was sitting at a red light at the intersection of Peachtree Industrial Boulevard and Pleasant Hill Road, a semi-truck ran into the back of his car. When the light turned green, the driver of the semi-truck accelerated and began pushing the car down the lane and eventually into the intersection and into the side of another car.

The drivers of both cars that were hit told police the semi-truck driver then made a U-turn and drove away.

While taking statements from both drivers, the responding officer was told that an unknown witness had followed the semi-truck to a nearby restaurant.

When the officer arrived at the restaurant, he located the semi-truck and its driver, Henry Cain. The officer informed Cain that he hit another car and pushed it into the intersection. Cain reported that he was unaware that his truck had caused an accident.

The officer noticed damage on the semi-truck, including that the bumper was pushed in and touching the passenger tire. He also identified paint and pieces of plastic from the car that was hit.

Cain was arrested and charged with hit-and-run, reckless driving and following too closely. He was taken to the Gwinnett County Jail.